The Power of Concentrated Oxygen

For the past 6 months, we have been treating our autistic son in a hyperbaric, enriched air chamber with very promising results.  Based on the research by Dan Rossignol.  To see the article, go to the Downloads and Multimedia page where you can check it out and even download it if you wish. 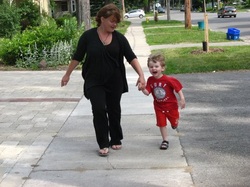 Barron and his Mom, Jen
When we first chose to look into hyperbarics for Barron, we had the choice of either traveling to Toronto for the treatment (not logistically possible due to the frequency of treatments required) or purchasing a hyperbaric chamber (financially challenging, but possible).  We opted for the second choice and purchased the identical setup as was used in the Rossignol et al studies.

When we first set up the chamber, we were worried that Barron would not want to get into the chamber.  That concern was quickly allayed when Barron climbed into it when our backs were turned.  Turns out he loves the fort-like quality of the chamber!

Our first few dives actually set off an upsurge of some of Barron's autistic symptoms, such as head banging.  Ironically enough, we have come to recognize this as a positive sign when starting a new regime and by the end of the week, our suspicions were confirmed...

Barron's vocalizations and babbling, which had started to decrease, started to increase again!  Over the next couple of months we would see the following benefits:

Conditions as diverse as Autism, MS, Stroke, Concussion, Cerebral Palsy, Tissue trauma, Rheumatic Conditions and Post-Surgical Recovery all respond well to hyperbaric therapy.  What I find surprising is that despite very compelling research, these are still considered "off label" indications in North America.

How can enriched air, under increased pressure affect all these different conditions?

At the time that I'm writing this, the mechanisms of HBOT (hyperbaric oxygen therapy) seem to have 3 primary modes of action:
1) Injured cells require extra oxygen to heal up and function properly.  This is especially true for neural tissue, which is very oxygen hungry.  Researchers talk about the "penumbral region" of a neurological injury.  When neural tissue is injured (by stroke, trauma or inflammation) there is an area of cells that die, but there is often a much larger area of cells that are under-functioning.  These under-functioning cells are still alive, but can't fire properly which in turn, cause them to appear to be dead, when in reality, they are still alive.
When these cells are exposed to the increased oxygen, they can start to heal up and function properly.  This healing seems to happen fairly quickly from the imaging studies that I have seen.  I believe that this is what caused Barron's initial increase in babbling and cognition.

2) The second action is systemic inflammation reduction.  No one is really certain as to why this is.  The increase in oxygen stimulates an increase in glutathione production (a powerful anti-inflammatory and antioxidant molecule produced by the body) which may explain part of it.  Another important aspect of this is that inflamed tissue tends to become hypoxic (oxygen deficient), which in turn increases it's inflammation - it's a vicious cycle.  By adding more readily accessible oxygen to the body, it can heal and start to shut off some of it's inflammatory processes.  As a person with arthritis (ankylosing spondylitis), I can vouch for the anti-inflammatory effects of the HBOT.  It's also amazing at reducing post-workout soreness!
The time frame for the inflammation reduction seems to be around 2-3 weeks, with 1-3 days of potential increase in inflammation at the beginning due to the increased oxygen free radical production (this can be alleviated by a good antioxidant supplement).

3) Increased stem cell production.  Some studies have documented an up to 8 fold production of stem cells from hyperbaric chamber use.  This to me, is particularly exciting as it represent not just repairing what has been damaged but means there is a potential for true regeneration.  Many people have started to use hyperbarics as a potential anti-aging tool because of this stem cell effect.  Nobody knows why this is happening with the HBOT at this time.
The time frame for the increase in stem cells is in months.  The increase is often first noticed at the 4-6 week mark which is why many of the people in the HBOT studies who continue past the study parameters (many HBOT studies are 4-6 weeks in duration) continue to show additional gains.

Below, I've posted a combination of videos and precis of sections from The Textbook of Hyperbaric Medicine.